The Norman Conquest: Adventures in Woodworking

My in-laws came to visit last week and part of the visit turned into an epic yak shave, so I thought I would share the fun. Not just because it’s a funny story (which it definitely is), but because I see so many parallels as to how we respond to requests as developers.

Now the primary reason for this visit by my inlaws was the acquisition of a “new to them” computer. Mom-in-law, Judy, wanted to transfer her stuff to the new computer and leave the old computer to Dad-in-law, Norm. And, since this is my husband the systems administrator we are talking about, Trever wanted to upgrade and back up both computers as well. As you can imagine, this is a time consuming operation, and they planned to stay for a couple days. 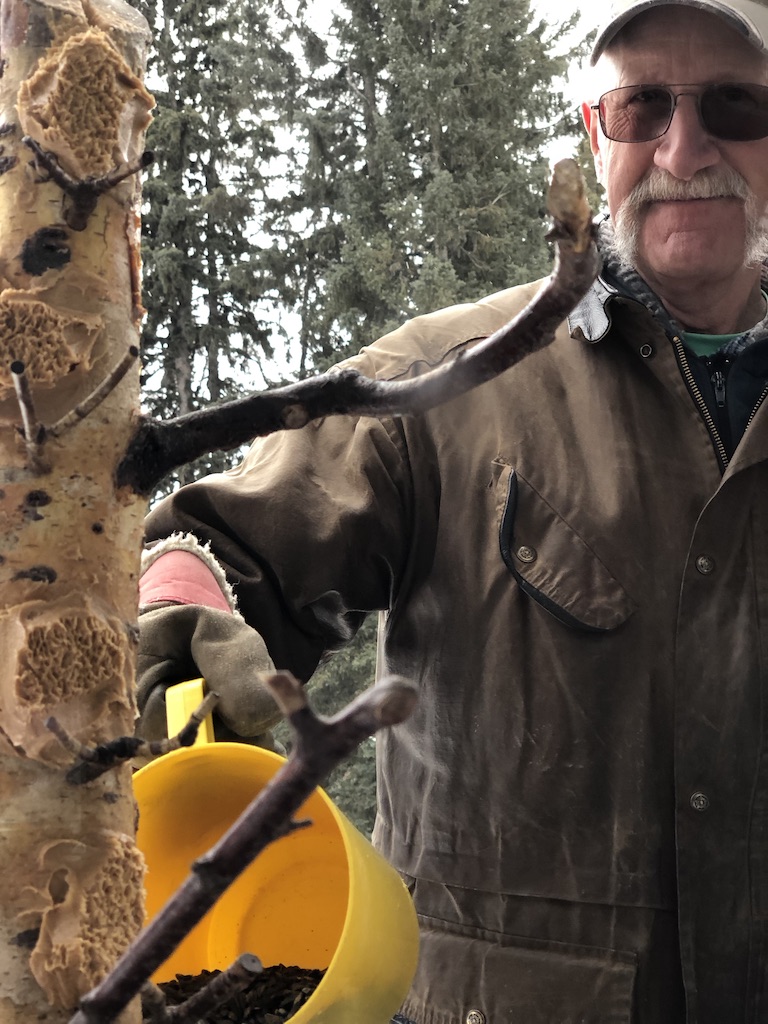 While they were here, Norm, my father-in-law (pictured above), was trying to do things for us (to make up for all the work Trever was doing) and he got up early to make us breakfast Friday morning. In the course of making breakfast, he discovered… our broken kitchen drawer. We probably should have warned him. This is a drawer in our kitchen that has been broken in some way or other pretty much since we moved into this house over 5 years ago. Unfortunately neither my husband nor I are particularly handy with respect to woodworking or cabinetry, so we’ve just been putting up with this drawer that constantly threatens to fall out of the cupboard and dump our cutlery all over the floor. Norm, OTOH, is very handy, so he decided he was going to fix it because it would be simple.

It was SO not simple.

First, I want to say, he did all the proper things. Took the drawer out, measured the whole thing, and measured the cupboard. The next thing he discovered is that the drawer, once extracted from the space, was fairly damaged on the bottom from all our years of using it improperly. There were splinters, so he also had to glue up the whole bottom edges of the drawer to repair all those splinters, at which point he discovered we also didn’t have any clamps, which would’ve been very useful. 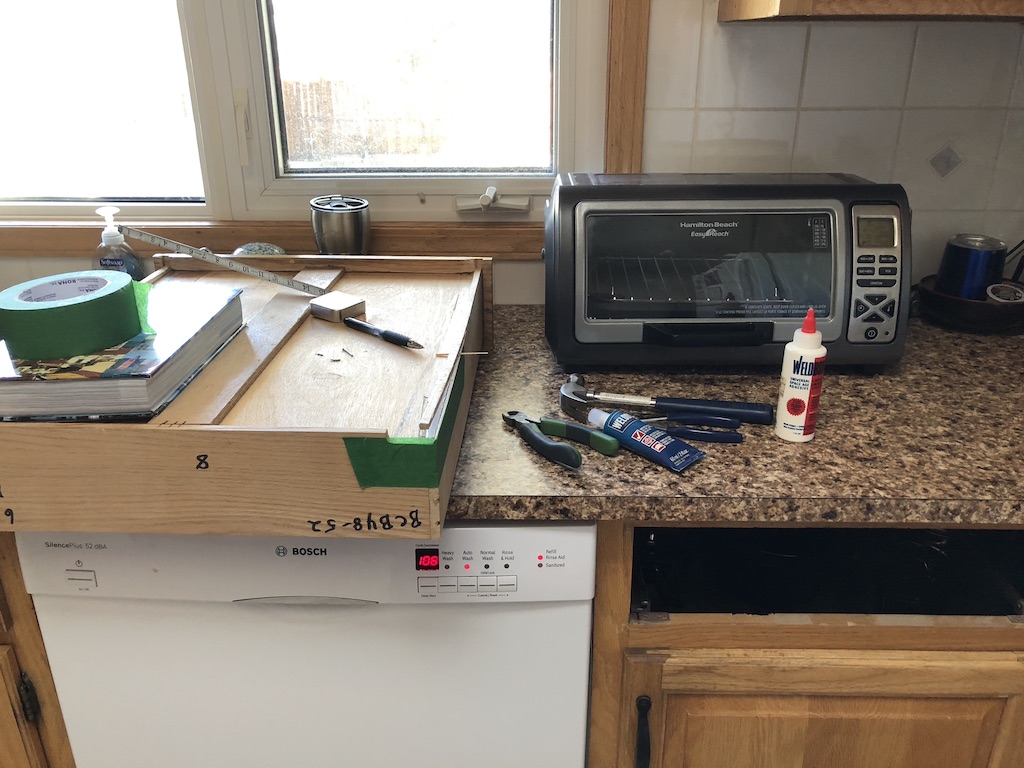 So, he and mom-in-law went out and bought some clamps, and found a woodworking store, and bought new slides for the drawer. After all the gluing and clamping was completed and dried out, he started with the slide installations.

That’s when it really started to go wrong. Turns out the new side-mount slide wouldn’t fit on this type of drawer because these cabinets were made way back in the ’80s. So, instead of getting everything installed on Friday night, he spent a good part of the evening looking at YouTube, lots of videos, doing a lot of Googling, and he found the right kind of slide that would work for these drawers. (Note, for the interested… “bottom mount slides” don’t go on the bottom of the drawer… they go on the bottom edge of the SIDE of the drawer. Sheesh)

Fast forward to Saturday morning, when he went and found the right kind of slide, the undermount center slide, and started mounting it. Keeping in mind he had planned to go home on Saturday morning, but no, he was still working on our drawer. He got this undermount center slide installed on the narrow strip of wood running across the bottom of our drawer that seemed to be tailor made precisely for such an undermount slide. He got it all put together, started to hook it up underneath in the cupboard… and it fell off.

Okay. This seems like a long story and it is, but it is also an excellent example of a story that illustrates -
unintended consequences. You see, Norm is an experienced woodworker and he thought, “Fixing a drawer, that’ll be easy. I know how to do that.” And he did, but it wasn’t until he had the whole drawer out that he started discovering the problems with it and it wasn’t until he had purchased hardware that should work that he discovered it wouldn’t work because the drawer was too old and it wasn’t until he started putting together the right piece of hardware on the drawer that he discovered that the original drawer also wasn’t put together very well. I think I missed the final part where, when he got everything mounted, he discovered the drawer wouldn’t slide in because it was now sitting too high in the cupboard opening and the top edges of the drawer were hitting the cupboard face. Thankfully I did have a little jigsaw that he used to slice two tiny little pieces of wood out of the cupboard face to leave enough room for the drawer to slide in. 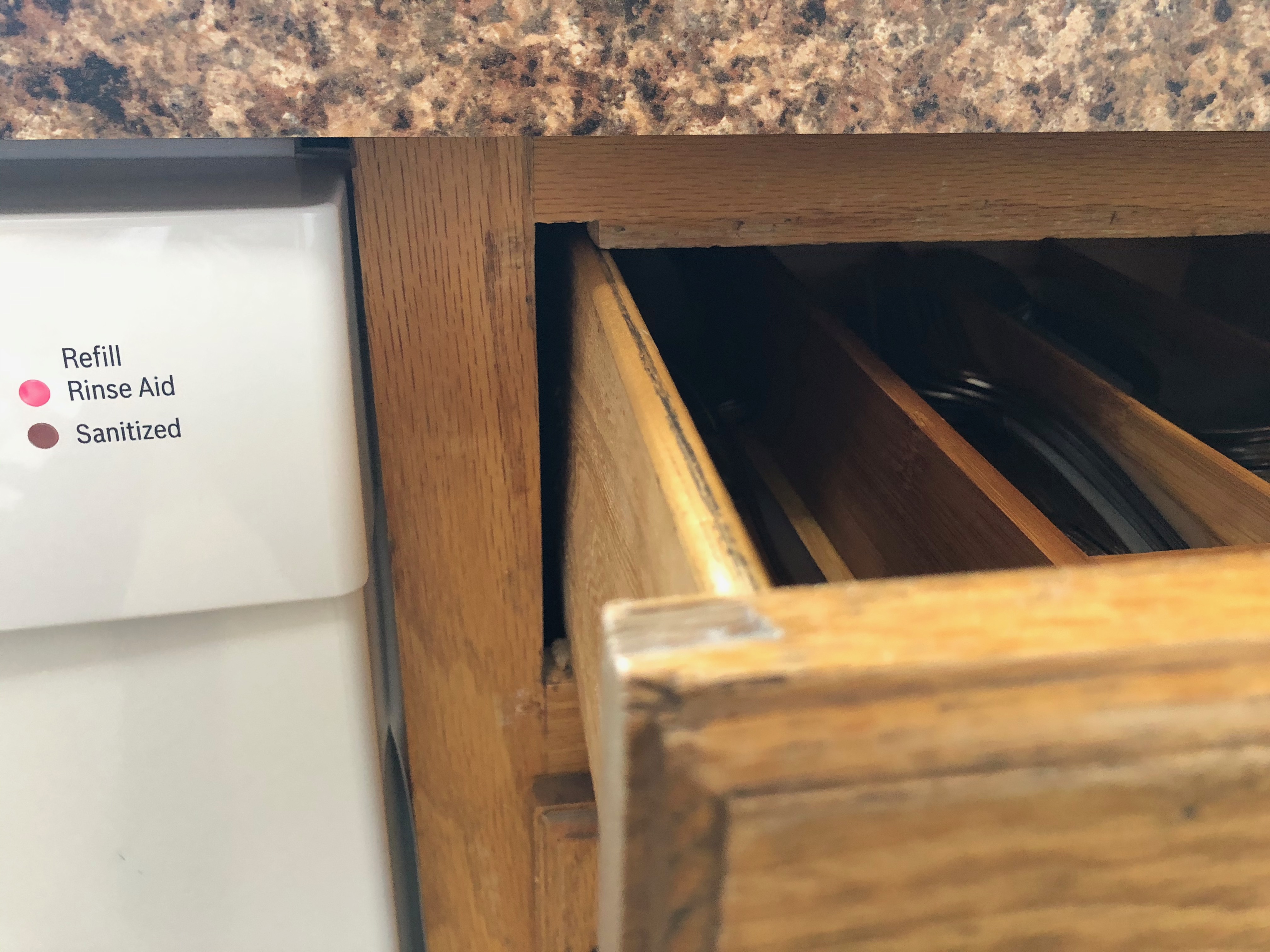 There were SO many things that went wrong in this seemingly simple repair job. Kind of like when you develop an app.

There’s a lot of moving parts, and a lot of things that can go wrong, even when you are experienced, and you take all the pieces out and look at them thoroughly before you get started. Just knowing the basics is a good start, but unless you have created almost exactly the same app before, you are more than likely to run into a few (or more) challenges. Just because you are familiar with web development, it does not follow that you will automatically know how to develop a mobile app.

And that’s where my 6 Pack Apps course comes in. I’m going to guide you through all of the steps, from having your first app idea to having a successful app in the App Store. I hope you’ll sign up for my newletter, so when 6 Pack Apps opens for enrollment again (very soon), you’ll be first in line.

P.S. It is absolutely magical to use that drawer now, after 5 years of struggling with it broken. Totally worth the effort!