There’s all sorts of stories and reasons behind the lack of women in software development, and I’m not planning on debating which or how influential any of them are. I’ll just pick one to start with here. We call it “the pipeline”. It’s really hard to increase the percentage of women in software development jobs, when the percentage of young women entering the field remains so ridiculously low.

Why is it ridiculously low?

Young women, and really before that, young girls, are convinced that programming is boring, where you are just locked up in a room with a computer pounding out code 24/7. That is such a narrow and really misleading look at the profession that it just breaks my heart. Good programmers need to understand, deeply, the fields related to what they are programming, in order to do a good job. Good software developers need to be people-persons, to work with the users/customers of their software, to determine their needs, and to help them solve problems that they never even realized they had. 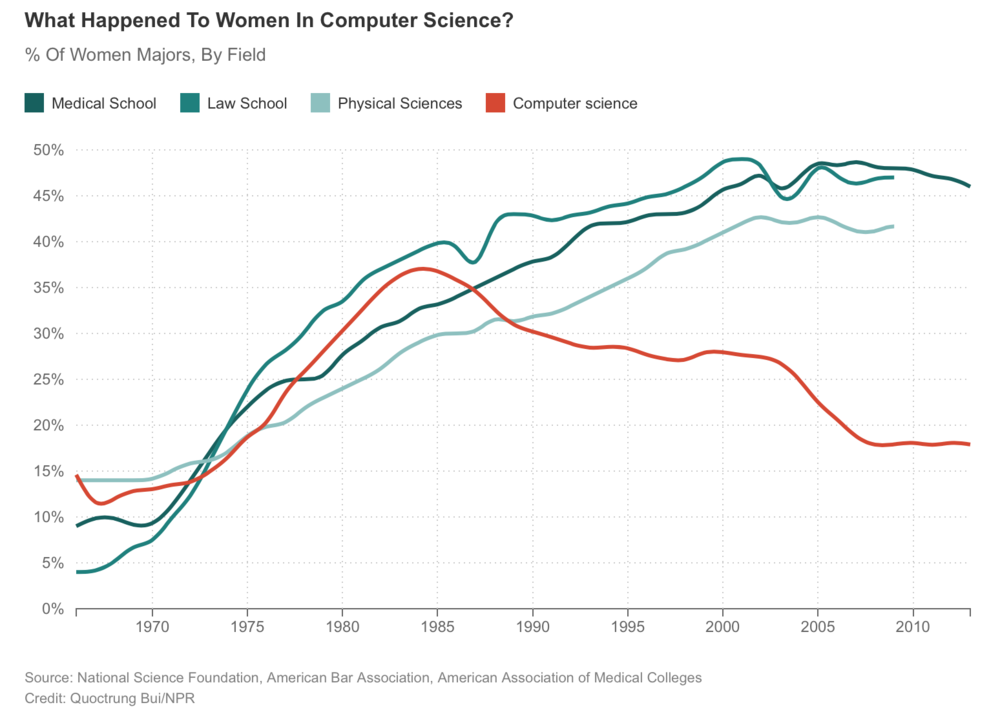 But here’s a good starting place: The share of women in computer science started falling at roughly the same moment when personal computers started showing up in U.S. homes in significant numbers. – npr.org

The simple fact is women were programming long before boys, when it was thought that programming was a “clerical” type of skill. Once the boys figured out it was more important than that, they made certain to elbow the women out of the way, quick enough. Follow that up with some really good ad campaigns that make it clear that computers are for boys, and now we have a self-fulfilling prophesy of a male-dominated profession, because there are not enough women mentors, and there is a lack of young women even wanting to enter in the pipeline into the field of software development. So let’s fix that at the very start.

Shouldn’t computer science be like reading/writing/arithmetic? Get kids, really young kids, learning how to program. Have a progression of skills that are taught and practiced throughout their school years.

We teach reading and writing and arithmetic right from the get-go in schools. But computers are part of the new literacy, so using computers, and TALKING to computers, and telling computers what to do is a basic skill that needs to be engendered right along with those other three.

Introduced at an early enough stage, it becomes “just something you do”, and not something related to video games or logic skills or math skills or whatever reason people pick to assume that boys are good at it while girls are not.

I would also argue that programming is a “maker” skill, and kids love to make things. Programming is making something with your mind, in collaboration with the computer. There is a joy involved in creating something new. Kids feel that way about their art projects, why not about their programs? What I’d really love to see is Facebook and Pinterest & Instagram filling up with links to my friends’ kids’ programming projects, much like their art projects show up on your fridge now.

“Look at this neat thing my kid made”

Why don’t we have this already?

I’m doing my part. In a couple of weeks, I’m teaching the Girls Learning Code Ruby Workshop. We can always use more mentors, which will help us get some of those girls OFF the waiting list, and into the class!